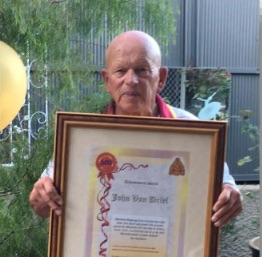 Five hundred competition games is a lot of games for any sportsperson to achieve in any sport.  Recently Monbulk Bowling Club celebrated John Van Driel playing his 500th pennant game for Monbulk Bowling Club. John started bowling in the men’s pennant competition in October 1994 and since then he has rarely missed a match. During this time John has played in 27 finals matches and has also been in 5 successful premiership teams.